This morning was cloudy, with temperatures in the 20s.  The highlight on our walk in the Bear Creek Greenbelt was catching sight of an American dipper–the first one we’ve seen in Bear Creek–and watching it plunge its head in the water in search of food, like this: 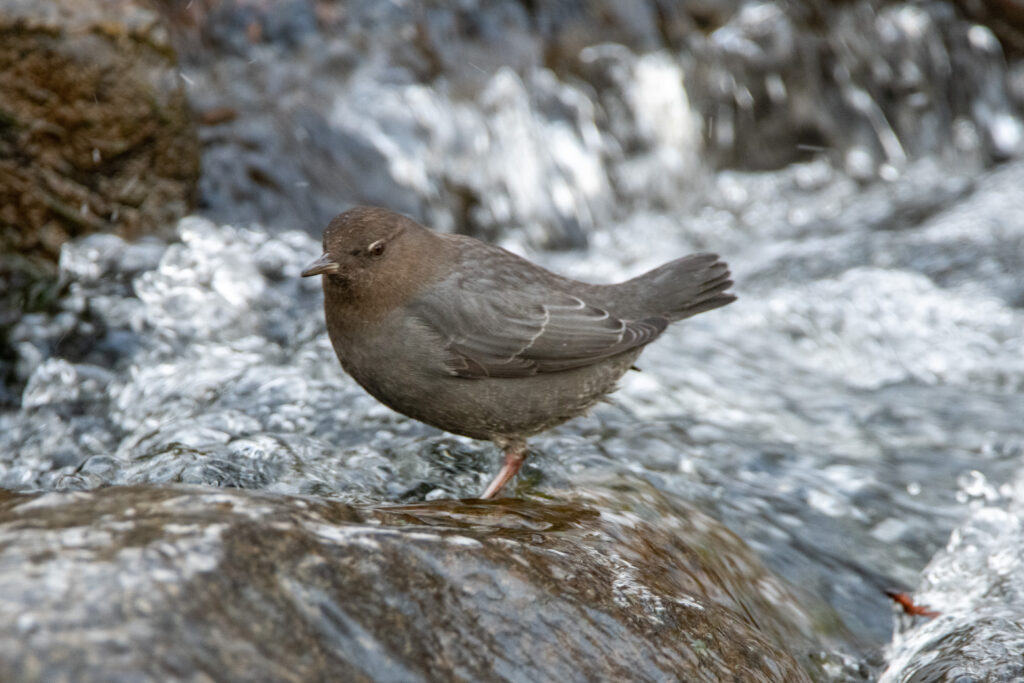 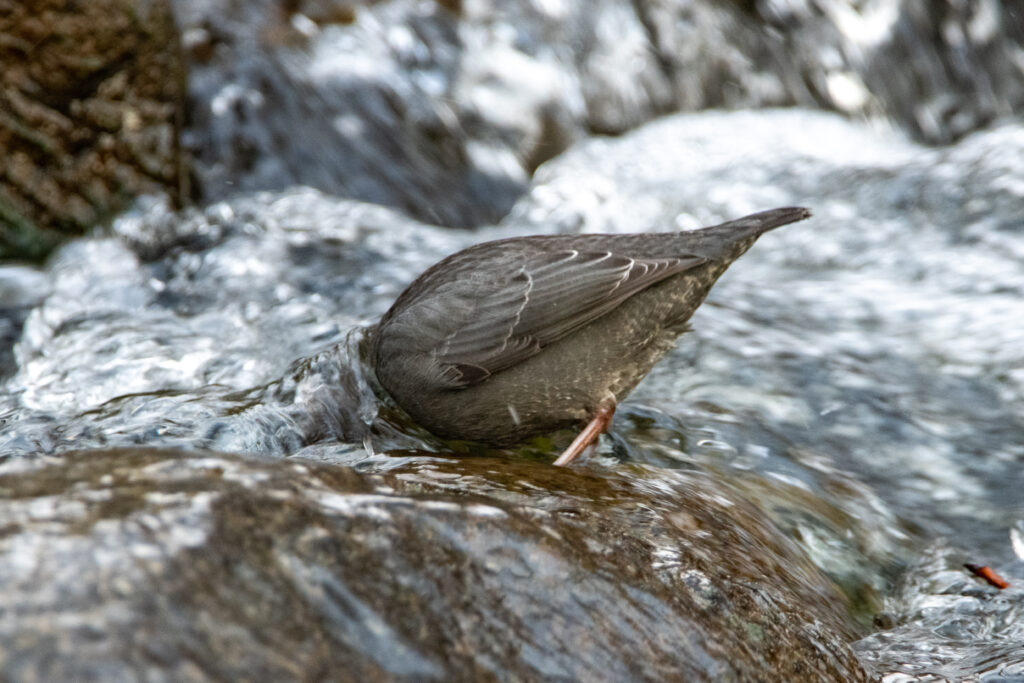 We watched it submerge its body, float downstream a few feet, hop up on to a rock, and bob up and down . . . repeatedly. 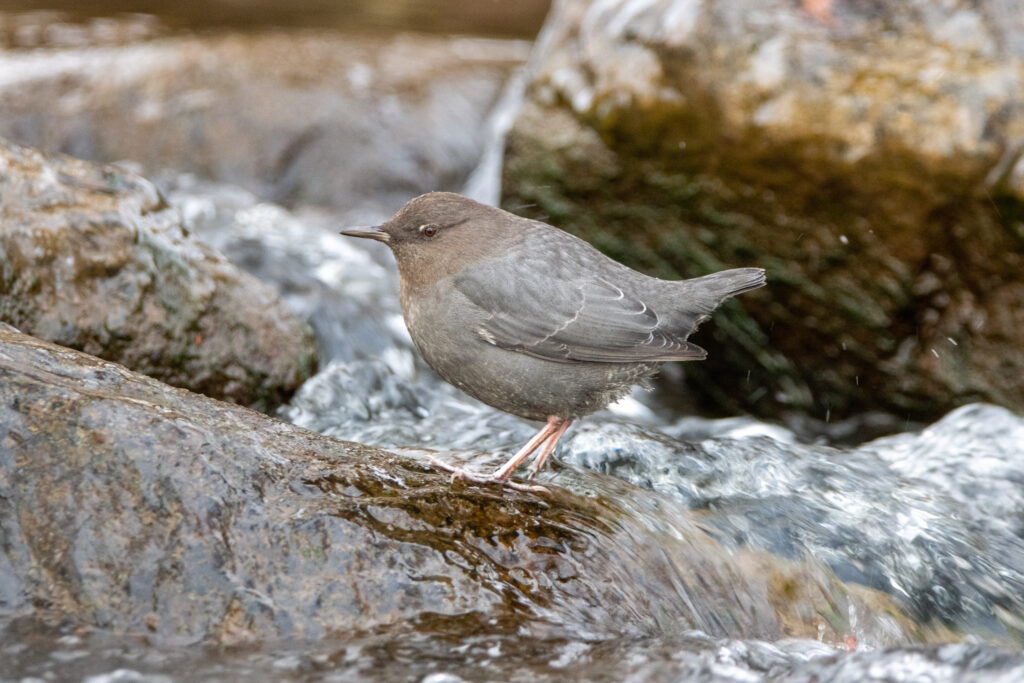 In the afternoon, the temperature now in the 30s and sunny, we returned to the greenbelt.  The American dipper was still there: 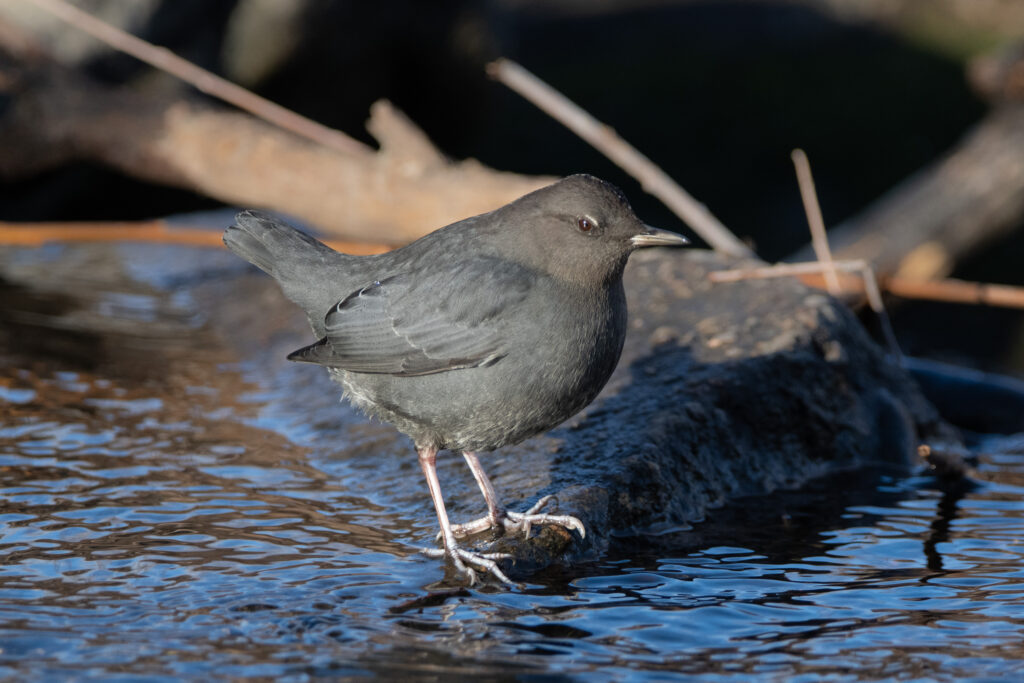 A dusting of snow fell last night.  Like yesterday, today dawned cold (in the 20s) and bright.  On our walk in the Bear Creek Greenbelt, we saw a couple of Cooper’s hawks, an adult and an immature individual, separately.  A red-tailed hawk was perched on the loudspeaker, as usual.  When we arrived at the pond north of Bear Creek, there were five gadwalls and four mallards (and one uncooperative belted kingfisher, who didn’t stay long).  Then another two dozen mallards flew in, followed by a few stragglers.  By far the birdiest place was an area by the creek east of the bridge.  I counted 18 American goldfinches, at least a couple of dozen of American robins, a couple of northern flickers, a few song sparrows, and a few dark-eyed juncos. 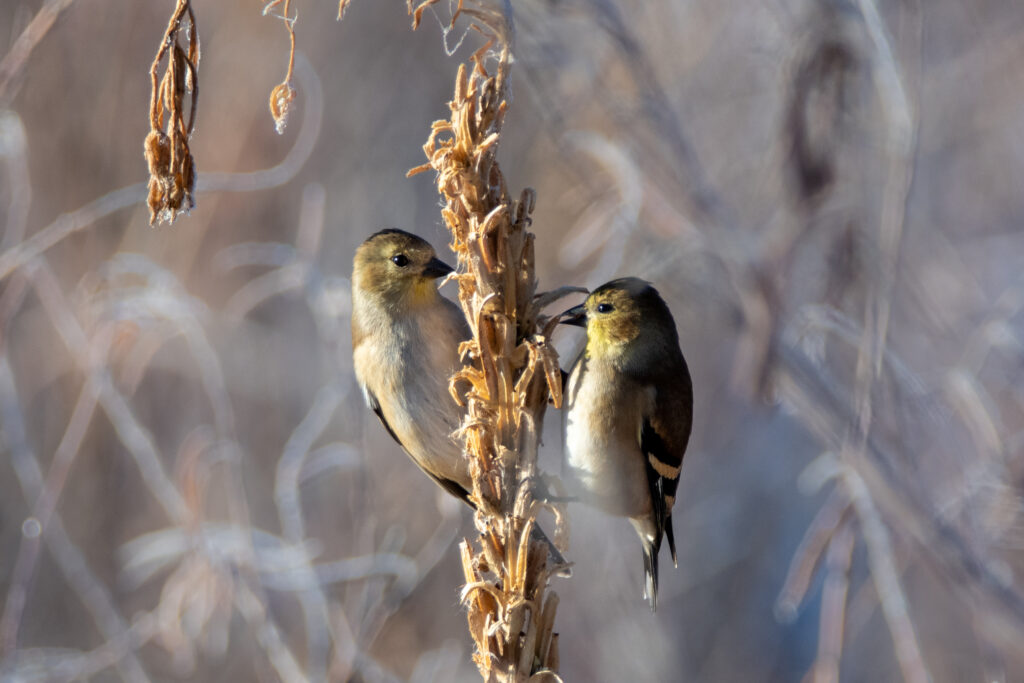 Near the beaver lodge west of the bridge, we saw three muskrats, including this one: 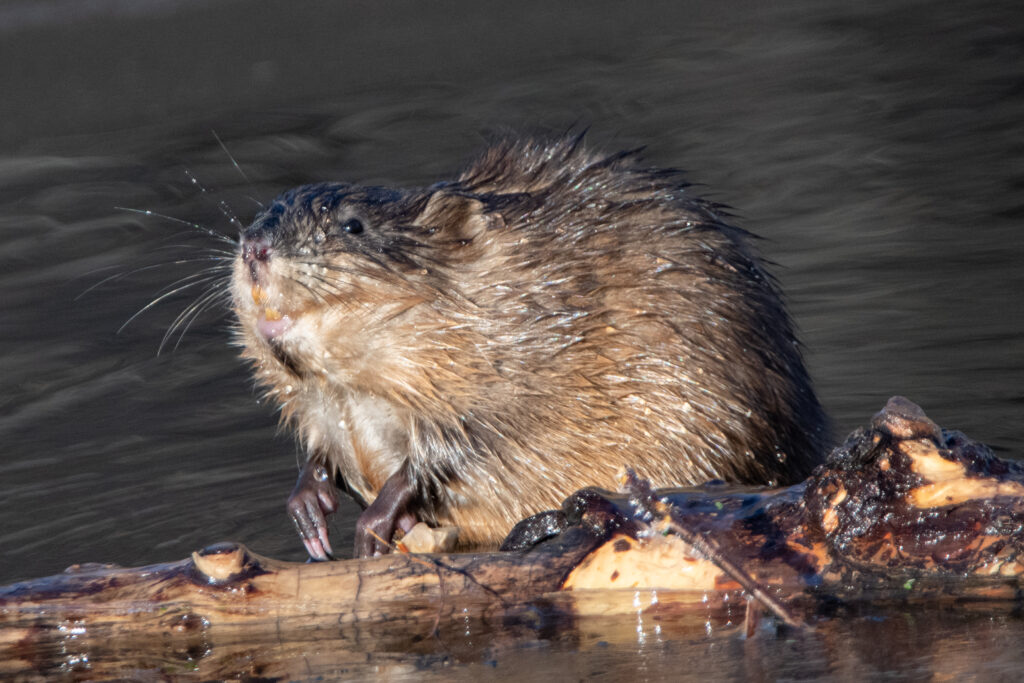 On this Thanksgiving Day the morning was clear and cold, with the temperature in the 20s.  We took the dog for a long walk in the Bear Creek Greenbelt.  We saw dozens of American robins, several of a number of species, including northern flickers, European starlings, dark-eyed juncos, black-capped chickadees, song sparrows, and house finches.  We also saw a common raven, and black-billed magpies, picking at the remains of a raccoon.

At the pond by Stone House we saw dozens of Canada geese, and a good number of mallards and northern shovelers, afloat in parts of the pond that weren’t frozen over.

Above Bear Creek we spotted a belted kingfisher: 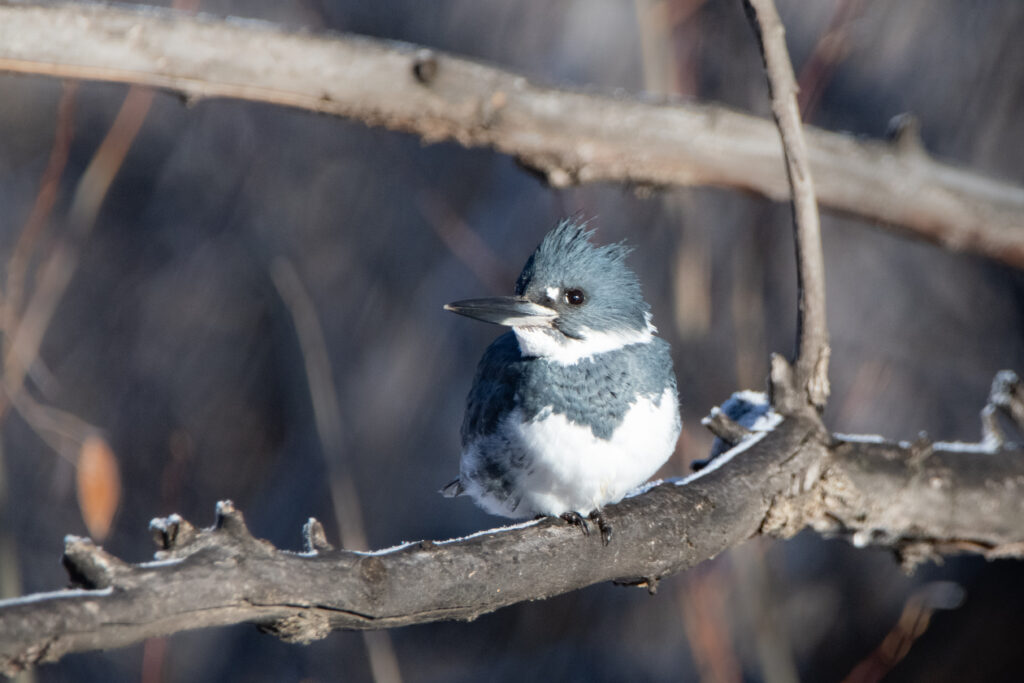 We also saw several muskrats perched on logs in Bear Creek, including this one: 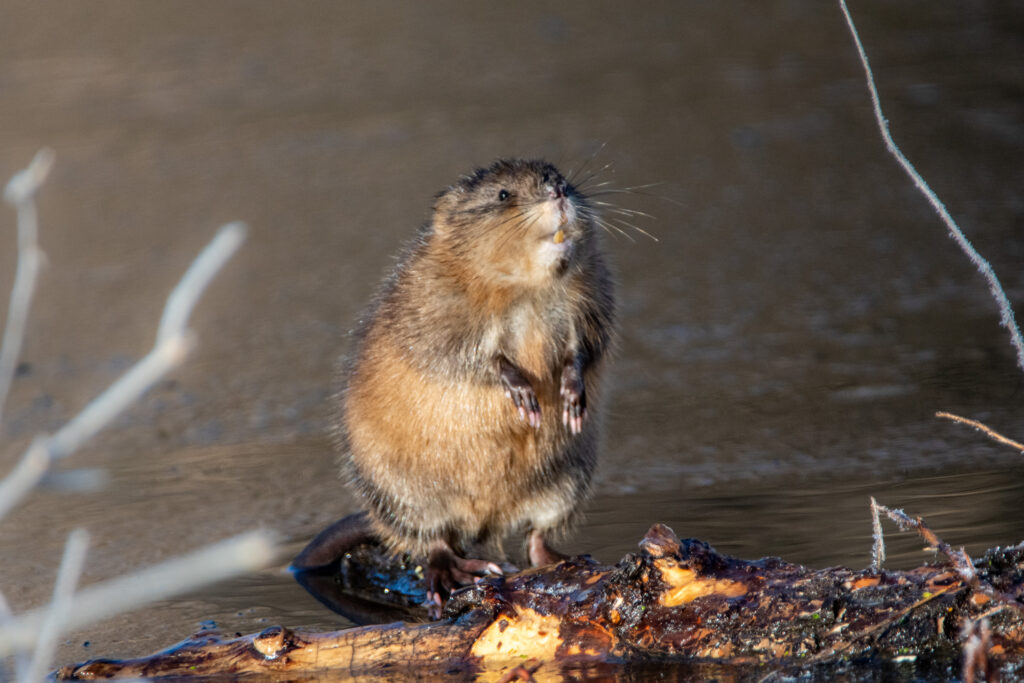 Muskrat (“My, what yellow teeth you have!”)

Just before the noon hour (the temperature now in the 30s) I spotted a hairy woodpecker in our back yard–the first one I’ve ever seen there.  We get downy woodpeckers and northern flickers on a daily basis, but not this species. 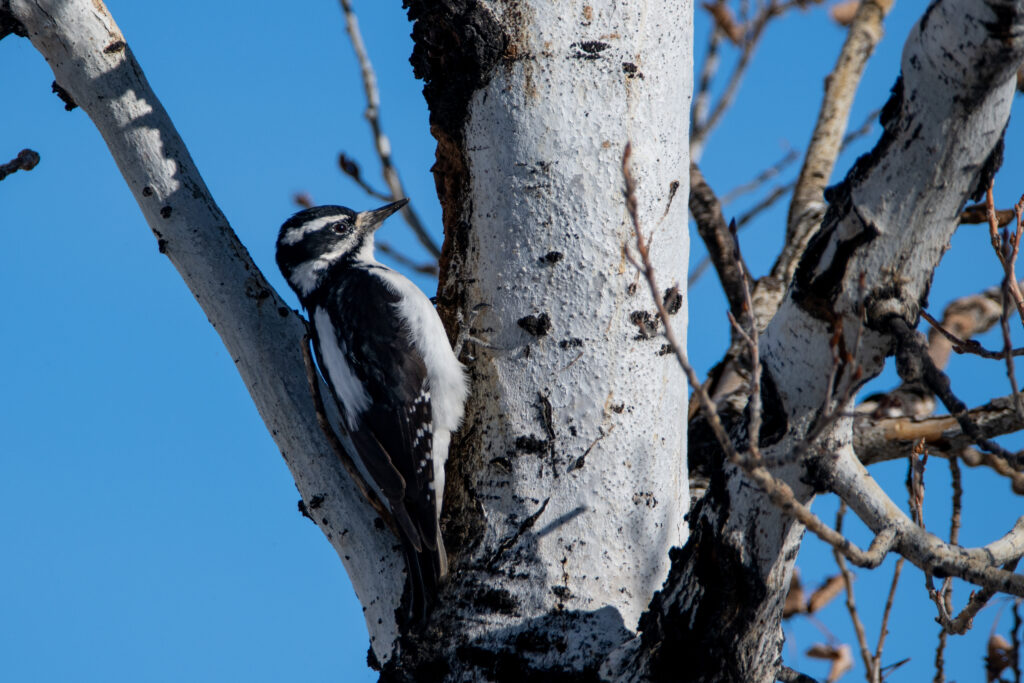 Just after the noon hour I spotted these two prairie dogs in the field behind our back yard: 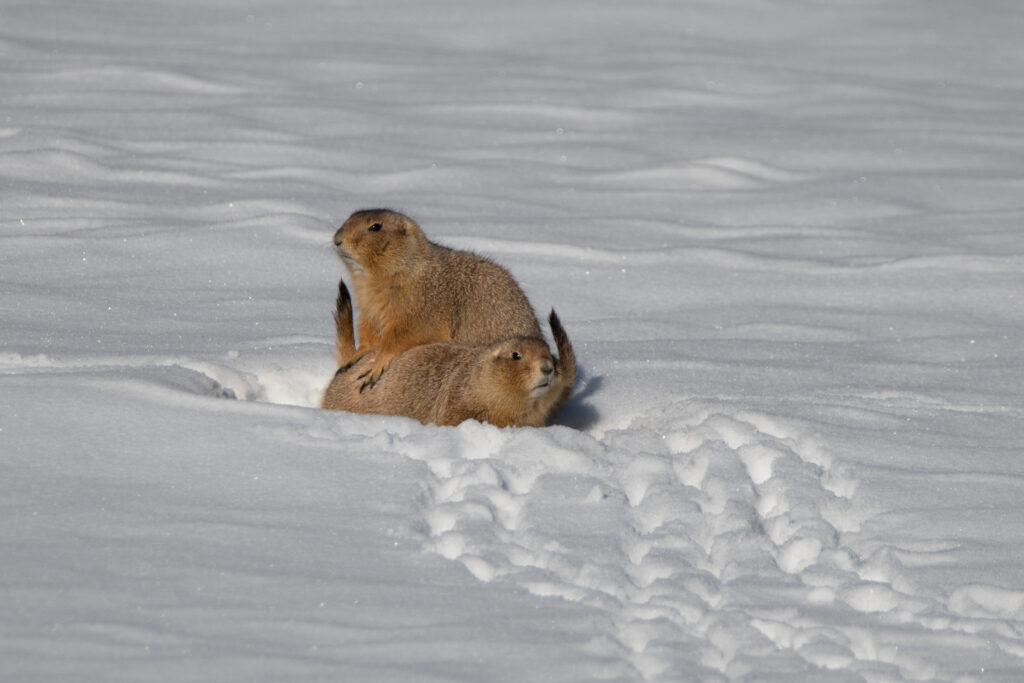 When we walked off our Thanksgiving meal, birdlife was scarcely to be seen in the greenbelt, although we did see a hermit thrush, which is rare for these parts at this time of year: 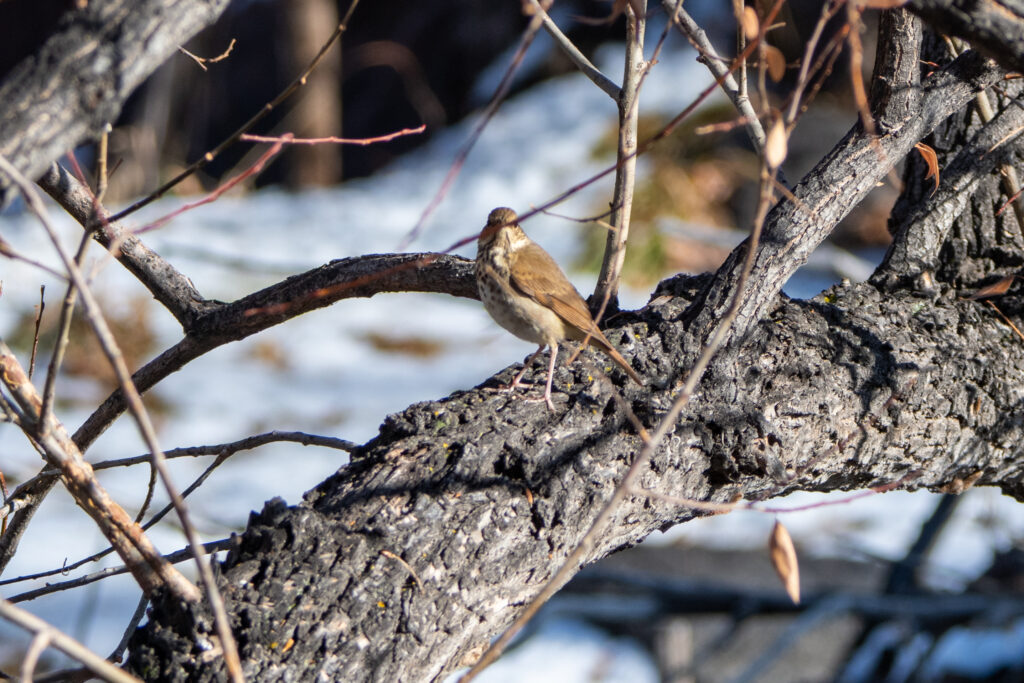 Muskrats, however, are everywhere: 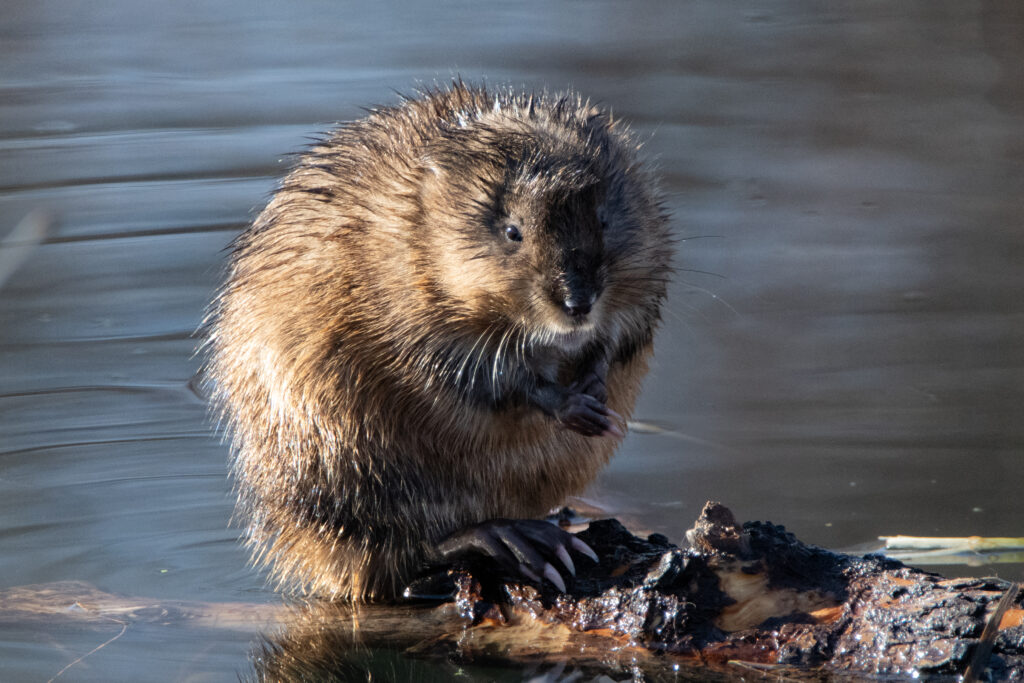 Mid-morning the temperature was in the 20s but it was brilliantly sunny.  I looked for the female Green-winged Teal (trailing a pair of Mallards) that we saw on a pre-dawn walk this morning in the Bear Creek Greenbelt, but couldn’t find it. 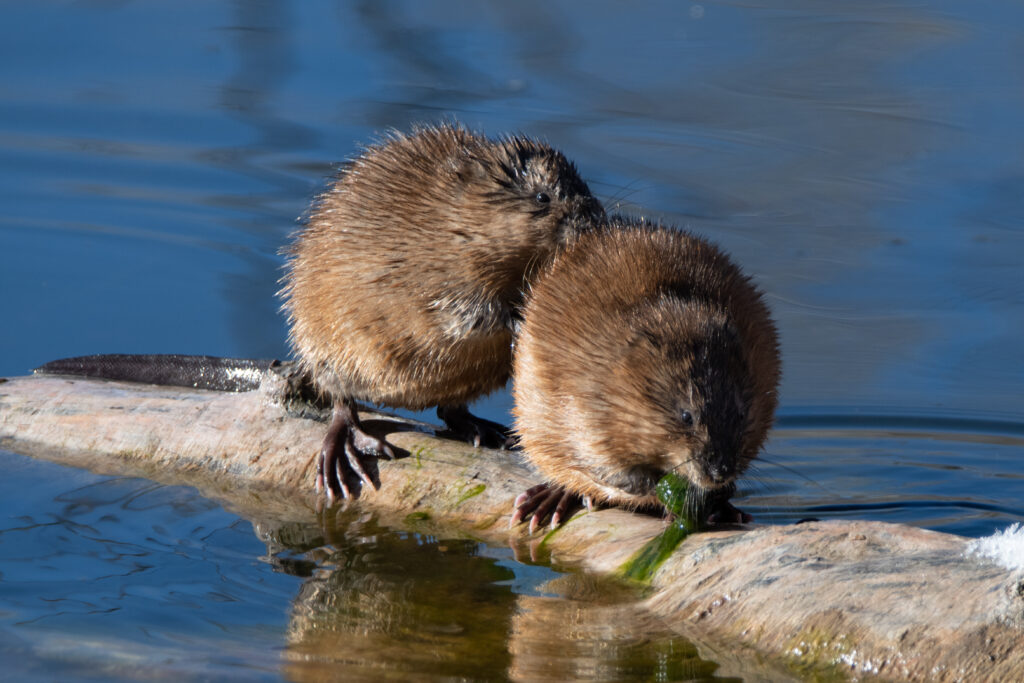 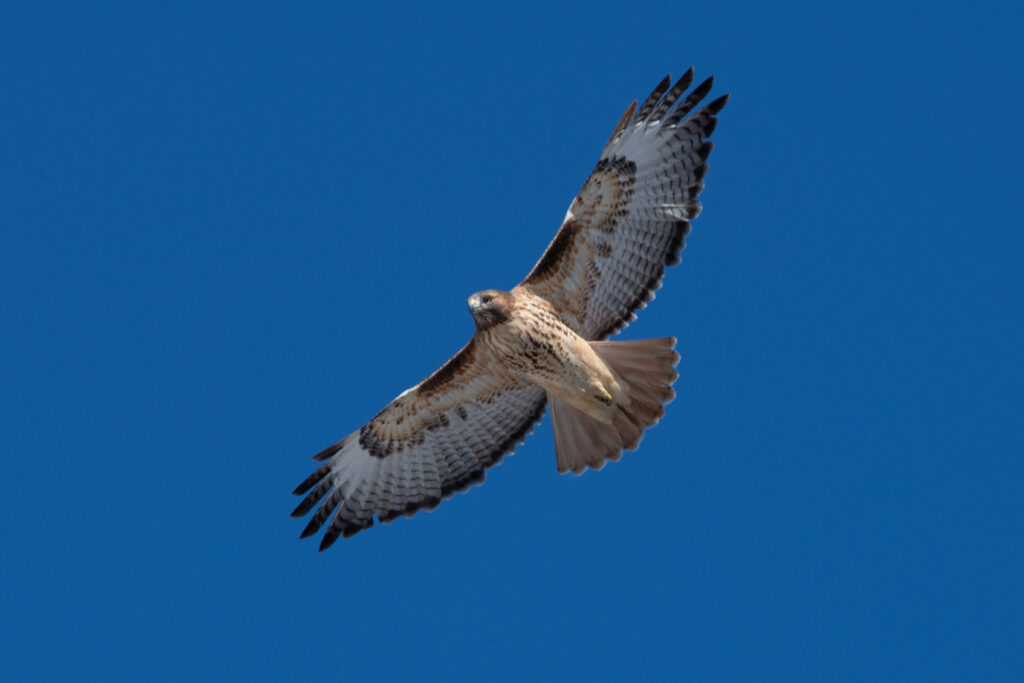 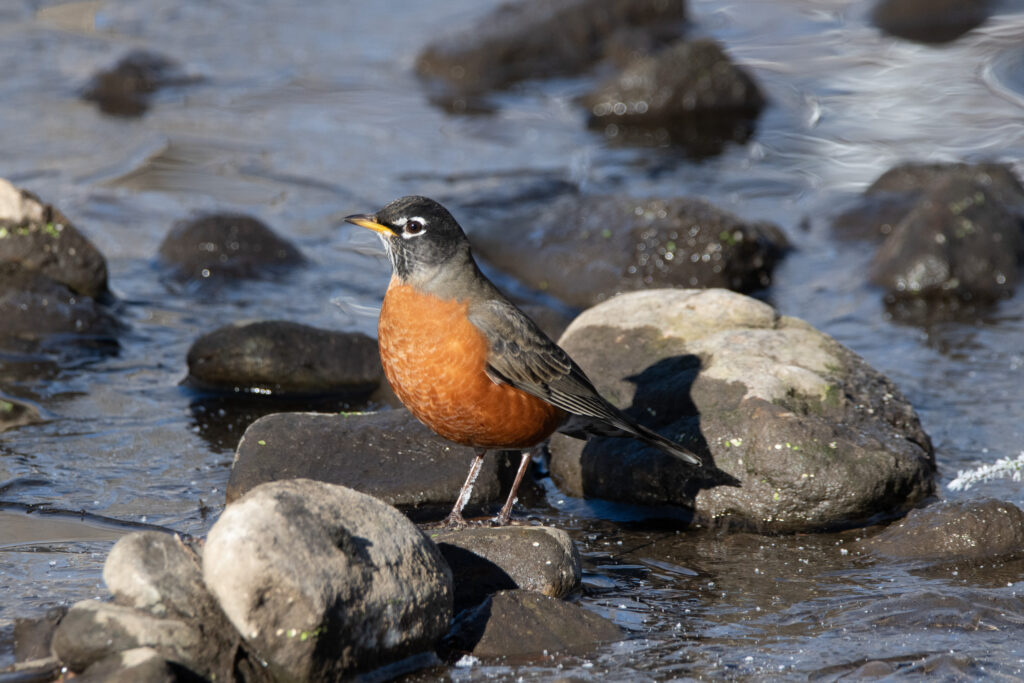 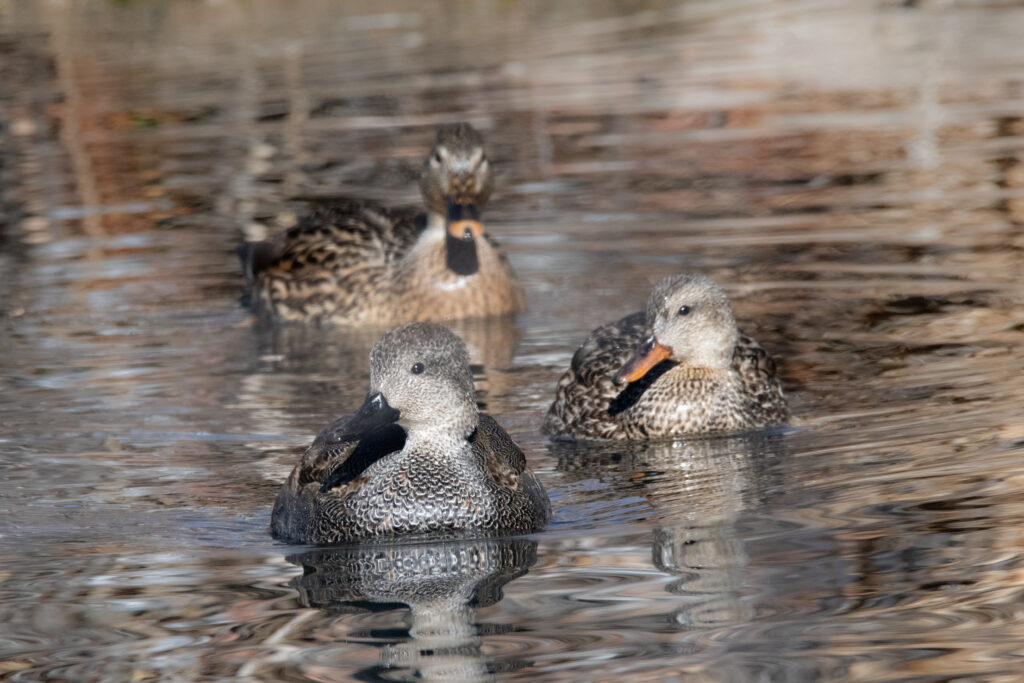 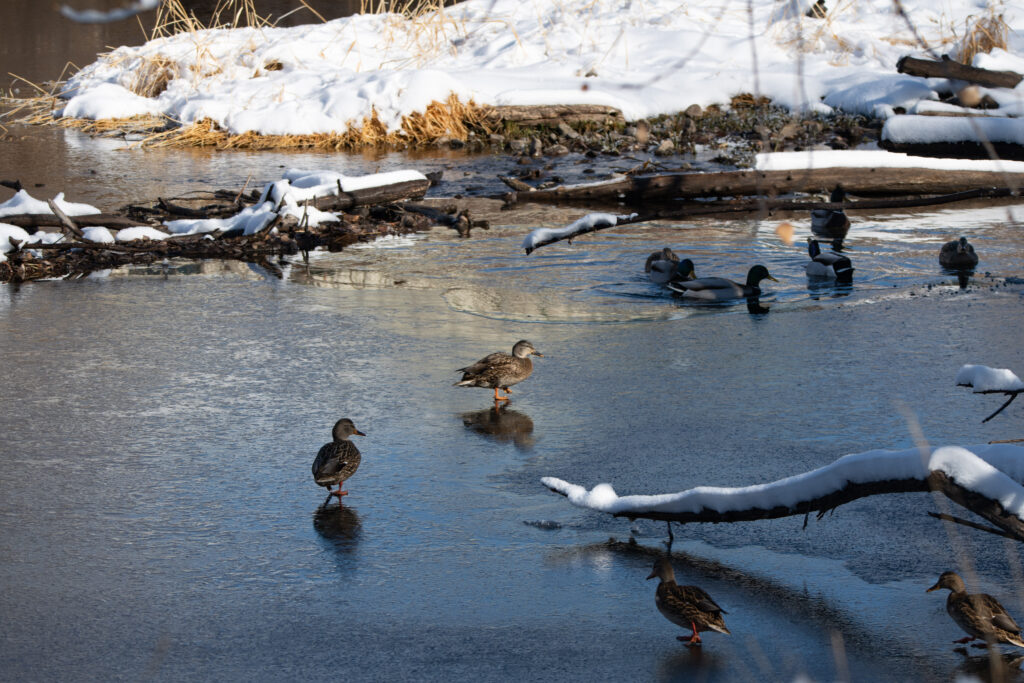 Mallards walking across iced-over Bear Creek to join their brethern

Several inches of snow fell this morning.  It was sunny, just above freezing, by afternoon.  On our walk in the Bear Creek Greenbelt we saw two pairs of Gadwalls, several Mallards, our resident pair of Red-tailed Hawks, a Belted Kingfisher, and several Song Sparrows.  Here’s one of the Song Sparrows looking for something to eat in the reeds by the pond north of Bear Creek: 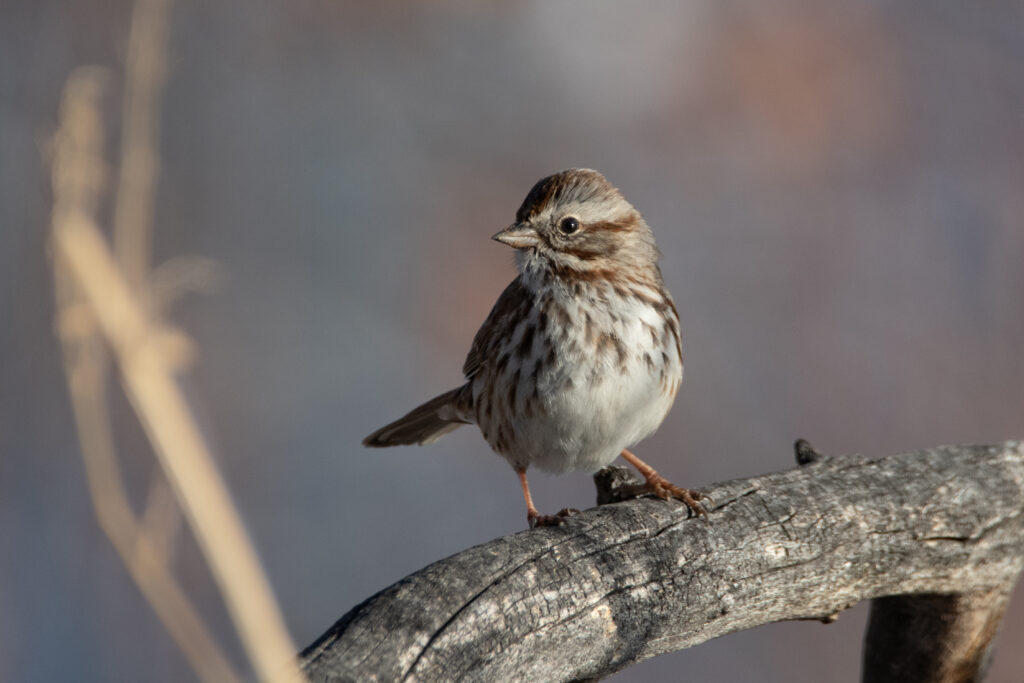 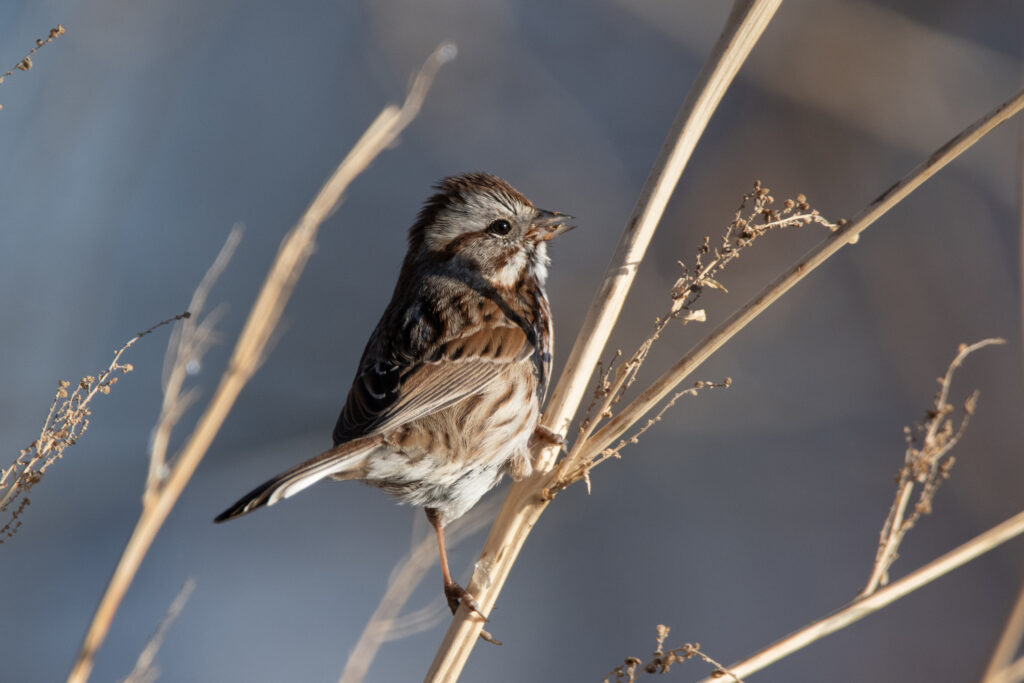 This afternoon in the Bear Creek Greenbelt we saw this manky Mallard among the other Mallards: 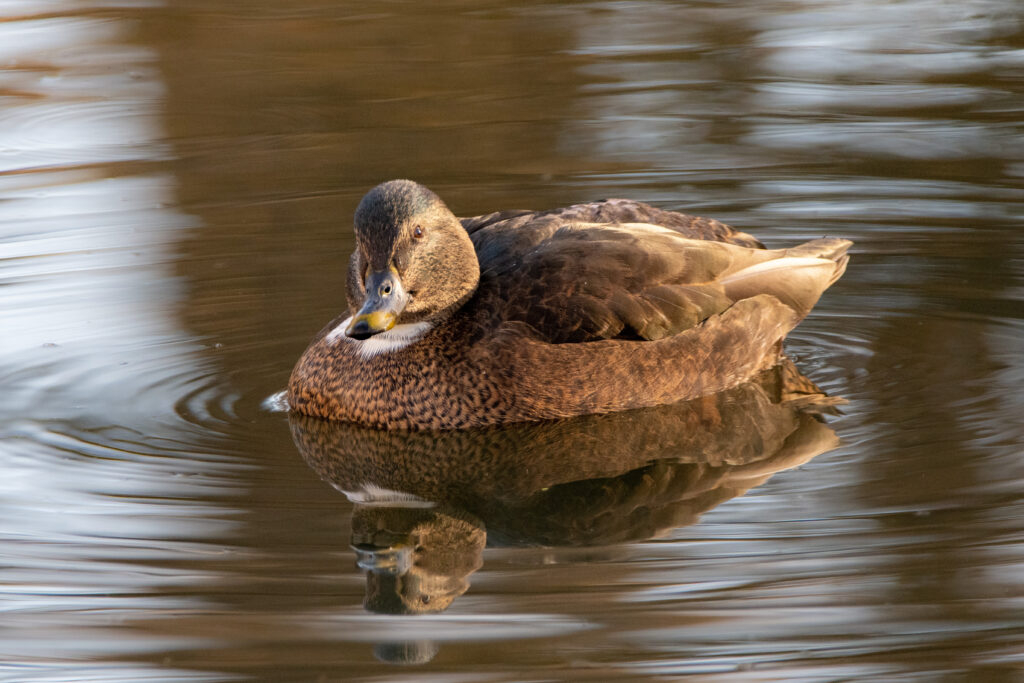 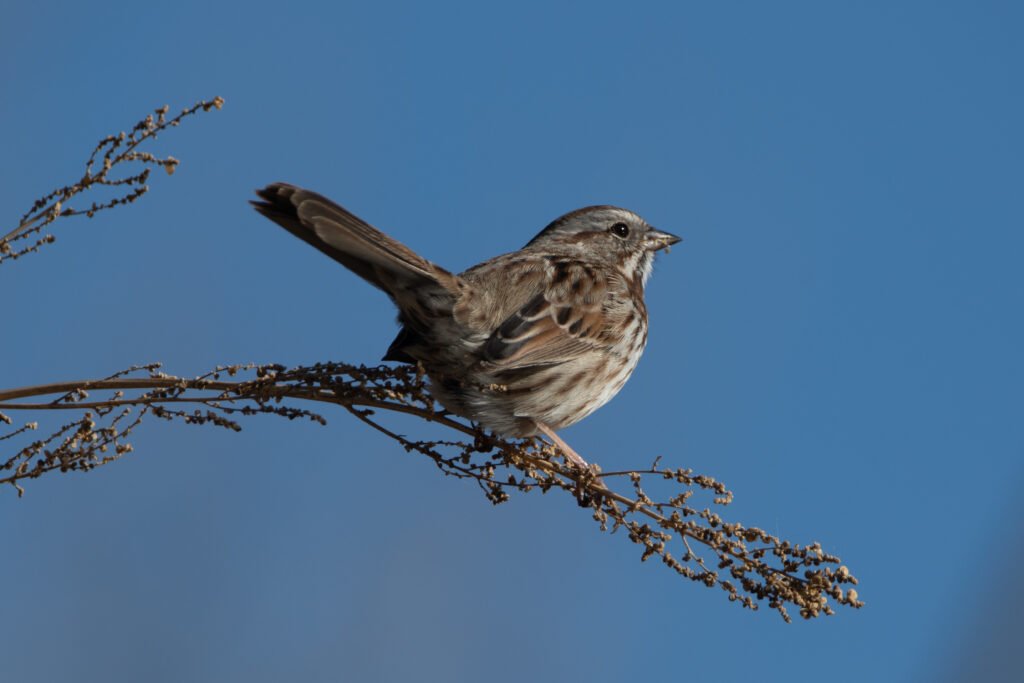 We saw a few ground-feeding Dark-eyed Juncos, including this Gray-headed subspecies: 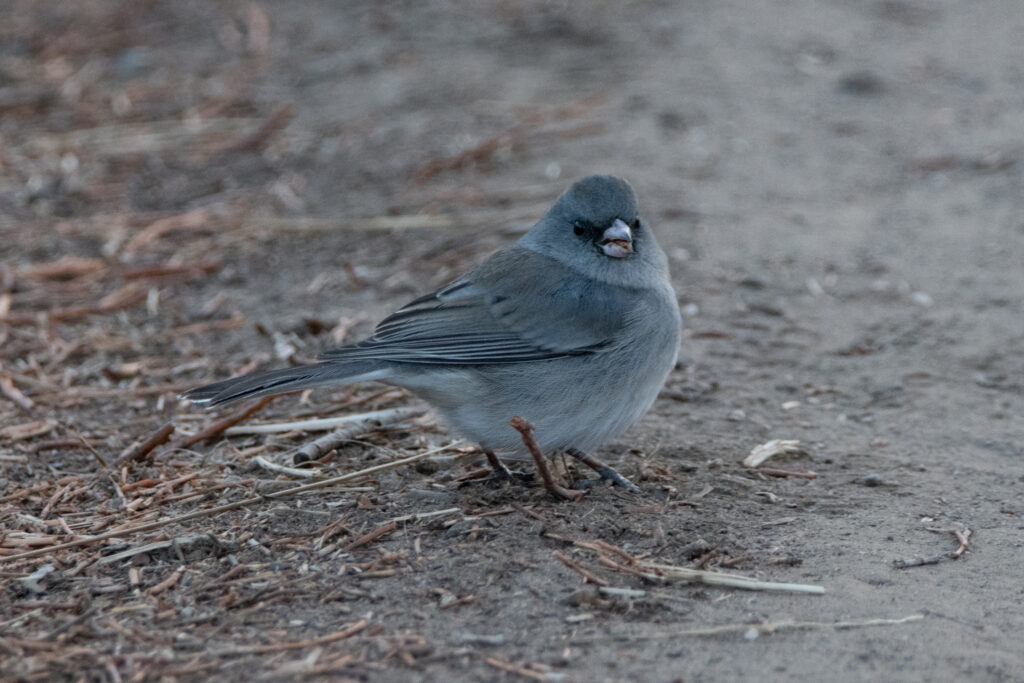 On our afternoon walk in the Bear Creek Greenbelt we watched this muskrat chew on things for a while: 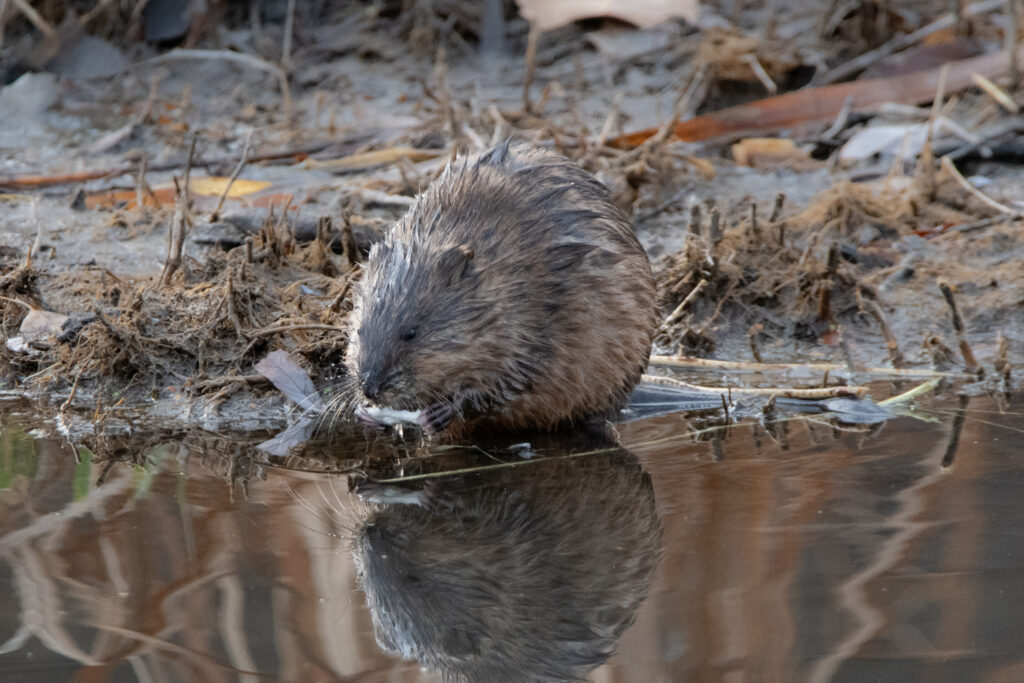 My better half spotted this first-year Red-tailed Hawk in the Bear Creek Greenbelt today after work: 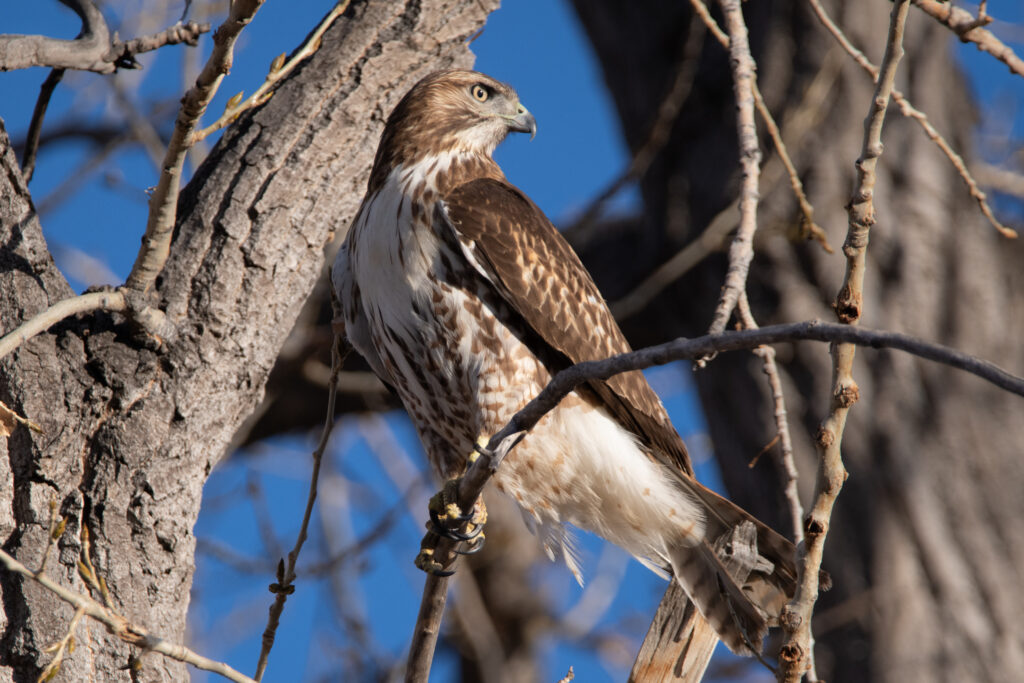 Here’s a second Red-tailed Hawk we saw while walking through our neighborhood: 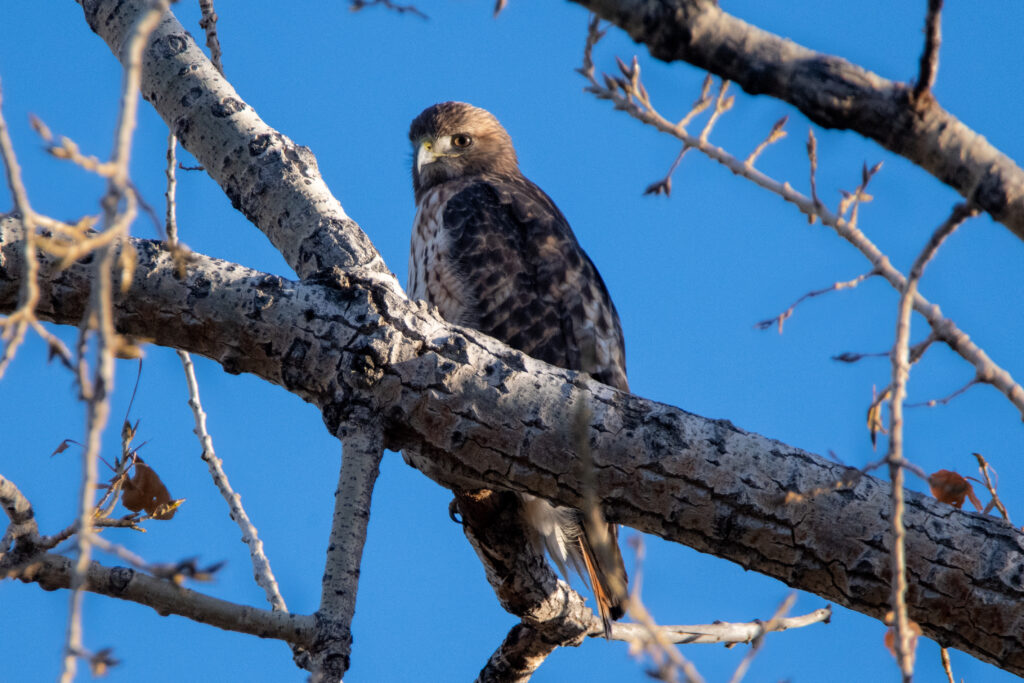 Even though it was a dark early morning (the moon was full this past weekend), we weren’t able to see any of the Leonids.  There was light cloud cover, and only the brightest objects–Venus, Sirius, Procyon, Capella–were visible.

It was sunny and in the low 60s when we walked the dog after work in the Bear Creek Greenbelt.  We caught sight of the Green-winged Teal again in the reeds just west of the bridge.  We also heard her soft, plaintive quack. 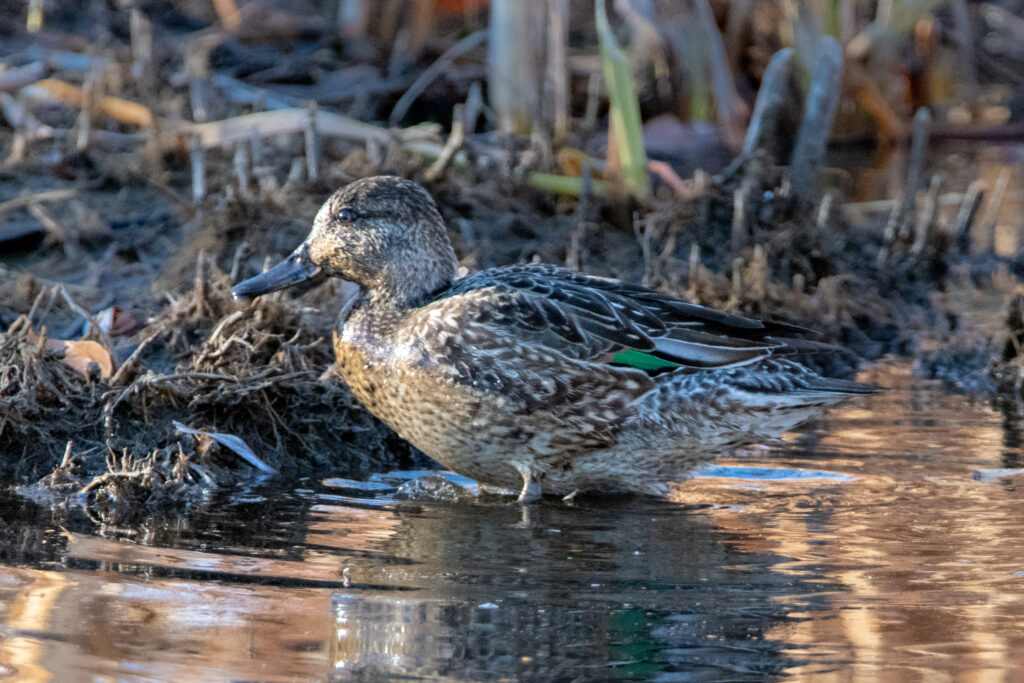 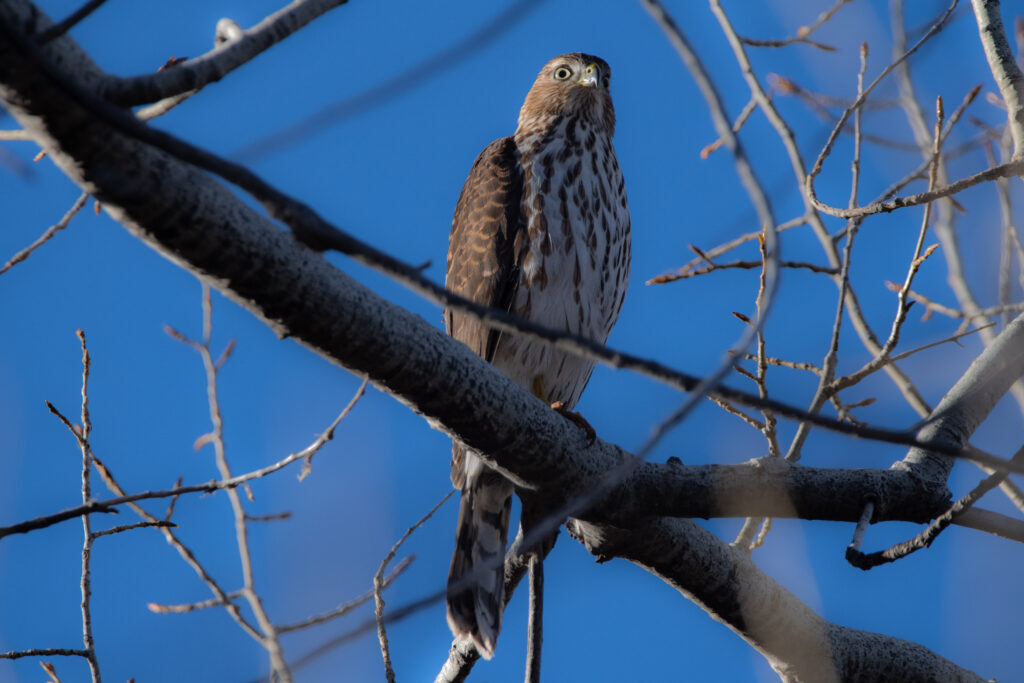